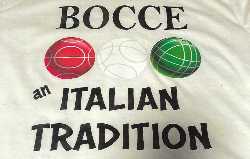 Bocce is a unique cultural tradition passed down from one generation to another. Italians love Bocce and it ranks next to soccer as the great Italian national past time.

From Caesar Augustus to George Washington, Bocce has had a long and colorful history. The name Bocce was coined by the Romans. Italian immigrants are credited with bringing the sport to the United States and popularizing it. Bocce is a big sport in Northern California with many major Bocce complexes and leagues in California cities including the 60 teams at Sacramento’s East Portal Bocce Club in East Sacramento.

The film “Breaking Balls” is a heartwarming documentary about the game of Bocce and the Annual Cleveland Challenge Cup Tournament, one of the largest bocce events in North America and held at the Italian-American Club in Wickliffe, Ohio. Wickliffe has a very large Italian-American community and a lot of bocce players who call the area home. The film follows three colorful figures involved in the game of Bocce and the Challenge Cup. The community of Bocce players are the soul of this sport and the heart of this movie.