Italian film is as much a part of Italian culture as the food, music and people! The 2019-20 Italian Film Festival celebrates the 36th year the Italian Cultural Society has presented these special Italian and Italian-American films.

Each film starts at 7:30pm - bring your family and friends and enjoy the social time before the film (doors open at 7:00pm) and join in the discussion after! The Italian Film Festival begins annually, showing each film only one time. The first films screen in September and October, then continue in January, February, and April, with the final film screening in May. The Friday Night Film Festival Series is organized by ICS Member Bob Masullo.

"POTENTIALLY DANGEROUS - WHEN IT WAS A CRIME
TO BE ITALIAN" 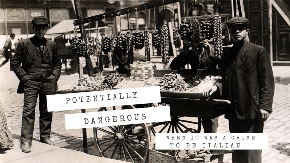 Admission $10
at the Italian Center, Carmichael

Meet the Director, Zach Baliva, at this screening of his new documentary film,

The film reveals the story of Italian immigrants interned and persecuted as America’s enemies during World War II.

During World War II, over 600,000 Italians were targeted nationwide with harsh restrictions. In California, 50,000 were placed under curfews and travel restrictions and their personal property seized.  Some 10,000 were forced to evacuate from their homes and businesses along the California Coast. Thousands were detained and hundreds interned in military camps in other states.

It was not for anything they had done but only who they were and where they came from. Their Language and culture were repressed during the war years. The collective trauma of these events changed Italian American culture and led many to hide their language, culture, and customs.

In the film you will meet Connie Foran, who watched the FBI raid her home and take her father away and Velio Bronzini, whose mother had a nervous breakdown after the government closed their family business. The film assembles expert historians who put these events in context.

According to the film Director, the film was made to highlight the sacrifice and experience of Italian Americans and raise awareness about this painful episode in history. When Baliva obtained his dual citizenship in Italy, he realized he had little connection to his ancestral story as a third generation Italian American and he wondered why. Then he discovered the reason – Italians in America were persecuted during World War II.

Potentially dangerous examines the lasting effects of that loss of their cultural heritage and the reason they need to connect back to this history to understand its impact on today’s Italian Americans.

Contact Zach to book a showing or become a
sponsor at zach@potentiallydangerousfilm.com

EVENTS ARE OPEN TO ALL

NO RESERVATION REQUIRED.
PAY WITH CASH/CHECK AT DOOR 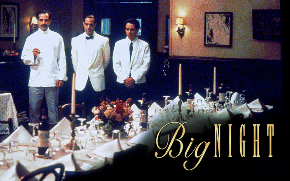 Admission $10
at the Italian Center, Carmichael

New Jersey, 1950s. Two brothers run an Italian restaurant; Primo and Secondo are two brothers who have emigrated from Italy to open an Italian restaurant in America, but business is not going well as a rival Italian restaurant is out-competing them. In a final effort to save the restaurant, the brothers plan to put on an evening of incredible food. American comedy-drama film co-directed by Campbell Scott and Stanley Tucci. The film stars Tucci, alongside Minnie Driver, Ian Holm, Isabella Rossellini, Allison Janney and Tony Shalhoub. 1996 / In English

EVENTS ARE OPEN TO ALL

NO RESERVATION REQUIRED.
PAY WITH CASH/CHECK AT DOOR